On September 7, 2015, the First Deputy Minister of Ukraine V.Negoda and representatives of the NGO "School of Energy Efficiency" I. Zapatrina and V.Lisovik met at the Ministry of Regional Development, Construction and Housing and Communal Services of Ukraine.

Representatives of the non-profit non-governmental organization “Energy Efficiency School” announced the beginning in cooperation with the National Ecological and Naturalistic Center of Student Youth of the Ministry of Education and Science of Ukraine a broad educational program on energy efficiency and energy conservation for different categories of students – from junior high school students local authorities and local self-government bodies, especially those whose functional responsibilities include Five issues of efficient use of energy resources. The program will consist of individual blocks of financial, economic and technical nature, familiarizing them with each stakeholder to acquire the knowledge and skills they need to implement energy-efficient measures and equipment, as well as to foster a new energy-saving culture among Ukrainian citizens.

For his part, V.Negoda noted that starting from this year, the State Fund for Regional Development (DFRD) was created as part of the General Fund of the State Budget, which is formed annually in the amount of at least 1 percent of the projected total budget revenue of the State Budget. The main manager of the Federal State Property Fund is the Minreginstroy. According to the Budget Code, the funds of this fund should be directed to the implementation of investment programs and regional development projects aimed at the development of regions, the creation of infrastructure of industrial and innovation parks and in accordance with the priorities defined in the State Regional Development Strategy and relevant regional development strategies. Proposals for investment projects, which are planned to be implemented by attracting funds from the Federal State Budget, are submitted to the Ministry for consideration by the regional state administrations as a result of the preliminary competitive selection and should include co-financing from local budgets. For 2015, 3 billion UAH is allocated for distribution within the framework of the RFRD, in 2016 the financing is planned for the state budget in the amount of 5.2 billion UAH. Consideration of investment projects received from the regions this year and in the overwhelming majority were aimed at introducing energy efficient measures. , identified a number of problematic issues that could significantly improve the efficiency of the use of the ERDF funds. Among these issues are the low institutional capacity of the management of budgetary institutions to develop investment projects and executive bodies in evaluating such projects; low awareness of project developers on energy efficient equipment and technologies and, as a consequence, low efficiency of proposed project solutions; lack of methodological recommendations and guidelines to enable local communities to take advantage of existing legal mechanisms. As these problems are inherent in almost all regions of Ukraine and require the introduction of a comprehensive approach, their solution is possible provided a wide network of training centers in cities is used.

Representatives of NGO “School of Energy Efficiency” offered to develop a series of training programs for local authorities and local self-government bodies, as well as for heads of budgetary institutions on preparation and implementation of projects involving the State Regional Development Fund, as well as in the organization of trainings with a focus on energy efficiency. projects in the settlements of Ukraine. These programs can be disseminated through the regional offices of the National Ecological and Natural Science Center and the youth of the Ministry of Education and Science of Ukraine, which are represented in more than 200 cities of the country.

V. Negoda noted that in the first phase, those territorial communities that approved the merger decision and in need of state support could be reached to build the capacity of the public authorities in the respective spheres.

The participants of the meeting agreed that joint implementation of this project could provide synergistic effect and support the Ministry’s activities in several directions – reforming the system of local self-government in terms of promoting voluntary community association and transition of the country to efficient use of energy and other resources and, as a consequence , improving the competitiveness of the national economy and improving the quality of life of the population. 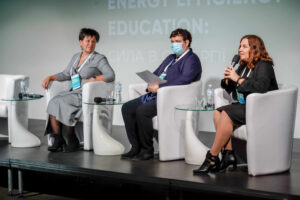 On October 28, 2021, the Conference “Energy Efficiency Education: Power in Synergy” was held

On April 26-30, 2021, the Job Fair in the field of energy efficient construction took place